First drafted, created into a Broadside 11″ X 17,” and locally published December 23, 2016. It was then published on our new website AUSAppp in the spring of 2019. Then in July 2019, it was revised, text improved, and published on our fitting site of wheelhouseartpub. It has also gone to press. Order your copy (or copies) before print copies run out.

The full text of the Twenty Theses to Preview:

America is Great when…

1. Its leaders are strong, educated, full of knowledge and wisdom, experienced, effective, good communicators, good listeners, morally good people who can also capture, represent, and reflect the essence of America including its spiritual essence.

2. It knows and values its principles (liberty, freedom, justice, a “light on a hill”) and know its principles transcends race, ethnicity, socio-economic class, occupational class, religion, gender, and even nationality.

3. It practices its great principles of liberty, freedom, and justice and values that they should continue to be a light to nations around the world.

4. It has fair and just laws and has revered and competent courts and law enforcement officers that protect citizens, enforce the laws, and help keep communities safe.

5. It has and maintains good public universities, private colleges, and military academies to prepare good citizens and good leaders of each generation and which stays on the cutting edge of the sciences and technology in all fields, maintaining itself as a global leader.

6. All its citizens are educated through at least high school. All public school children are taught character education including honor, respect, courage, patriotism, honesty, sportsmanship, etc. All secondary education students are taught American government, law, order among all the other subjects. And all students should be given the opportunity to go to technical schools and/or college to further their education and proper development into careers and professions to be productive and contributory citizens.

7. It has a strong, efficient commerce system of goods regularly exported and imported goods in international trade to keep the economy going.

8. It recognizes when bad decisions have been made or bad actions taken on America soil or in foreign affairs whether in international trust, military affairs, or commerce such as the outsourcing of jobs overseas including call centers where Americans’ personal information are easily compromised, and attempts to reconcile and reverse them.

9. It has plenty of manufacturing production on U.S. soil employing millions of blue collar Americans, a vital cog in the economic wheel.

11. It maintains fair taxes for which all citizens and businesses including online businesses have to legally contribute, both corporate and sales tax for businesses.

12. Its citizens by and large are healthy and active. No citizen receives government welfare assistance without giving back to society by required documented work whether P/T paid or volunteer work, except those that are disabled.

13. Its people are civil who regularly exercise restraint in anger for justice issues or desire for revenge or retribution, allowing the rule of law to do its job. The civil citizen does not take the law into their own hands but empowers the authorities to do their job.

14. Its law enforcement and police officers responsibly and properly use force to constrain others when necessary and also refrain themselves from shooting at unarmed suspects who are not posing a threat.

15. Its’ people, as a whole, are people of integrity who are honest both in their business affairs and their personal lives, across all socio-economic lines.

16. All its citizens exercise the freedom of religious and/or spiritual practice or the lack thereof, as they freely will, in their homes and/or in various houses of worship, prayer, meditation centers, or outdoors, and doing so with an attitude of knowing that those who exercise according to each their own faith lack thereof, do so equally under the same constitutional law.

17. It has very good national, state, county, and local parks for physical and mental health and the replenishment of the soul through recreation, leisure, time in the outdoors, etc.

18. It citizens are proud and strong and yet humble at the same time, refraining from an attitude of arrogance because of its greatness, for then they begin to forfeit their greatness when this attitude gets perceived by people of other nations with whom they interact.

19. Its children are raised in loving, secure, and safe homes with parents who fully support them.

20. Its people are generally happy and fulfilled in family, career, community, and society, even manifesting regularly through its people smiling in public, even toward strangers, throughout the land.

Author: Paul Wheelhouse
Publisher: Wheel House Publications, 2018
The most comprehensive and yet concise Christian devotional guidebook to Israel on the market with devotions for 52 sites 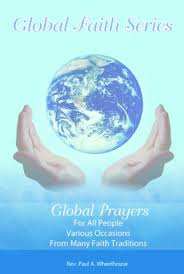 Light from Above: Sacred Scriptures